Genevieve's Rainbow Birthday Party is over, and since so much of my inspiration came from all over the internet I thought I should share our version.  So... 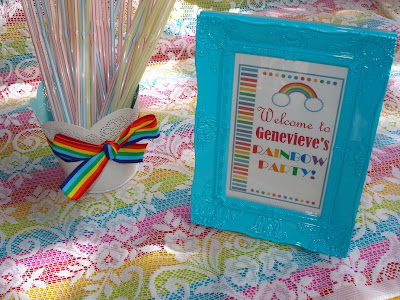 The frame in the above photo was from the Reject Shop, and the metal bucket was from a set of plant pots that I bought from Target last year.  Not that I keep plants in it, that's actually the one I keep my sewing scissors in.

I was naturally working my butt off on the day and my husband was in charge of photography so I don't have close ups of lots of stuff.. and some things I don't have photos of at all.  So yes, the above photo was taken this morning, not at the party.

And before we get too far, here are a couple of links to free printable rainbow party stuff that I found and used:  Printabelle and Paper Glitter.  The Welcome sign was made using Printabelle's Rainbow Stationery.  And I used Paper Glitters invitation, and also their thank you tag on the lolly bags.

The following photo was taking not long before guests started arriving.  No food out yet because this is Australia and it would have been covered in flies! 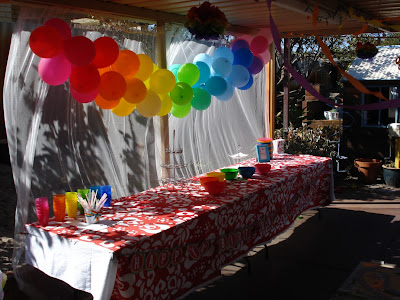 The balloon banner was made the night before using these instructions.  I spent $2 on a balloon pump before we tackled it.  Money well spent!

The backdrop was a set of cheap curtains I picked up from Ikea for $6.95.  They have wool strung through the top and they're just tied on to the patio.

And here's a photo showing the patio from the other direction showcasing our beautiful hand made decorations (all inspiration is linked on my Pinterest board). 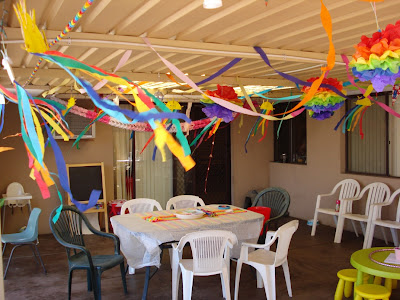 The kids and I spent a morning the week before making the sun/cloud rainbow plates.  I made the tissue paper pom poms while I was watching tv one night, and there's also a garland made up of little paper stars that I made whilst watching tv over many nights... it was initially going to hang behind the food table, but it didn't look right with the balloons, so across the roof it went. 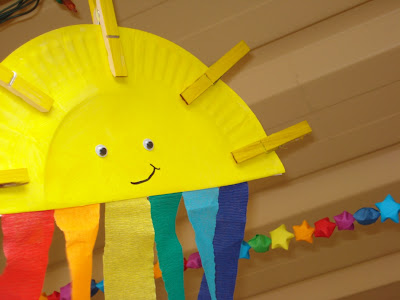 We also made a heap of paper chains in the lead up to the party, using ikea paper because it comes in the perfect rainbow colours.. and I forgot about them until the last minute.  So one ended up draped on our cubby (no photo of course), and the others are still above all the windows in our loungeroom where I had draped them to keep them out of the way.  Ah well.

Anyway.. you can see a couple of the party activities in the photo up there.  On the small green table was colouring in (and a hula hoop apparently).  I printed out a stack of the smile colouring in page from style me gorgeous and put some wind ups and crayons into a cute little bucket.  Only one kid actually coloured a picture in.. not quite as successful as I had hoped.

The beaded pipe cleaner bracelet table did much better.  I don't think any of the boys wanted to do it, but all the girls made at least one. 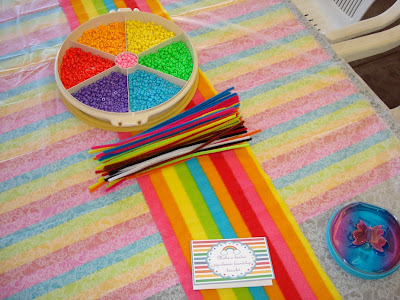 I also made a bean bag toss game!  The bean bags are made from flannel that I had already.  3 of them are filled with unpopped popcorn kernels, and then I ran out of corn so the fourth one is filled with soup mix.. it's a variety of dry beans and lentils.  Tasty :P 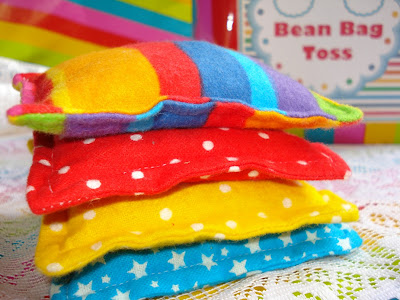 The bucket is an old BioZet bucket covered in wrapping paper. Yes, I buy my washing powder in a giant bucket.  The sign on the front was another one of Printabelle's printables.  I think it was the birthday party sign that I altered. 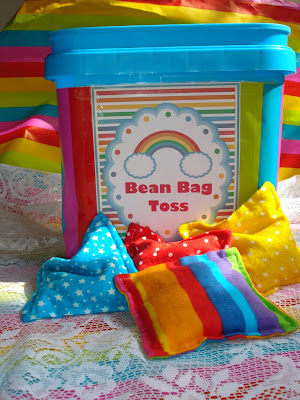 Another activity we had was a rainbow play parachute.  The kids loved it, unfortunately we don't have a single photo of it.. which sucks because it looked really cool.  I can tell you where I bought it though.. it's $19.95 from Deals Direct.  I threw all the balls from Geni's old baby ball pit pool on it and the kids had lots of fun bouncing them around, flipping them off, throwing them back on, and running underneath.  Definitely money well spent!

And since they were having so much fun with the parachute, and just generally running around, riding the bikes, racing swing cars, jumping on the trampoline, playing in our cubby and crawling in and out of our play tunnels and tents.. we ended up only playing one game, which was Pin the Cloud on the Rainbow! 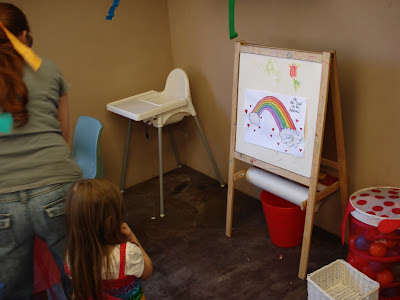 I painted the rainbow myself (based it on some clipart I found online) and put a big X on one of the clouds.  The clouds that the kids were sticking were a cloud shape that I found online.  All printed and cut out with the kids names already on them and a blob of blutac on the back.

I sewed a face mask to cover their eyes out of rainbow flannel.. but I have no photos of it.  I'm not even sure where my kids put it.. just imagine a face mask made out of the same stripey flannel as one of the bean bags I mentioned earlier!

And now for the food!

It's a bit hard to see, but I have some rainbow coloured bowls that I bought from Crazy Clarks yeeeears ago.  I colour coordinated food in those:  Red had cocktail franks, Orange had Cheezels, Yellow had Chicken Twisties, Green had green popcorn (that I coloured myself), Blue had Blueberry Cloud lollies, and Pink (which I pretended was purple) had sweet potato chips.. the purple kind obviously!

The cups and plates were all from Ikea.  I already had a couple of sets of each so I just went and grabbed a couple more.  I printed out lovely little rainbow sticker labels with all the kids names so they could find their cups again.  Drinks were Red, Orange or Green Cordial (in Ikea jugs) or water. 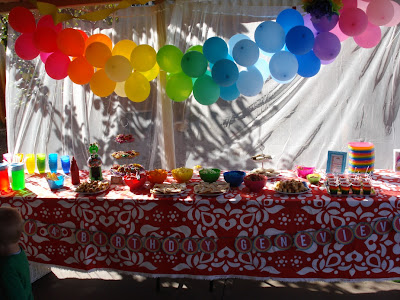 There were chocolate crackles on the cupcake stand on the left.. I put rainbow sprinkles in them, as seen in this photo I took of the leftovers the next day. 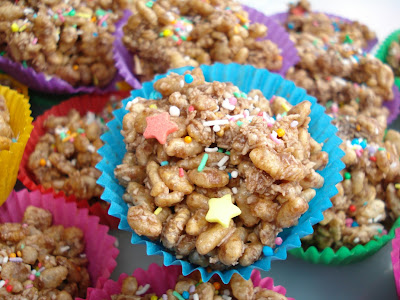 Confetti cookies were on the white cake stand on the right.. which are always a big hit!  Recipe can be found here.  I always make these dairy free so Lilly can eat them too (Here, have another leftovers photo) 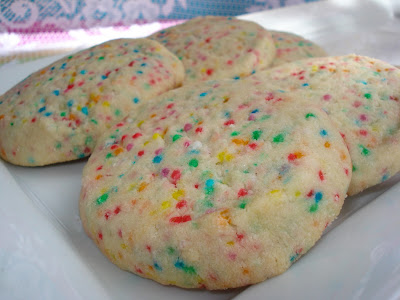 Rainbow Jelly Cups!  They took me all of Friday to make because I thought it was a good idea to do EVERY colour of the rainbow. No idea how they tasted because I hate jelly, but they sure did look awesome! 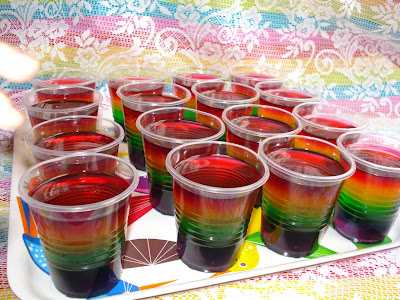 And yes, this is a leftovers photo too... That second tray full might have been too many!

Speaking of her cake, this was it!  I wanted to make one of those awesome layered rainbow cakes that are all over the internet, but Geni wanted a butterfly, so inside this butterfly is a rainbow marble cake.. 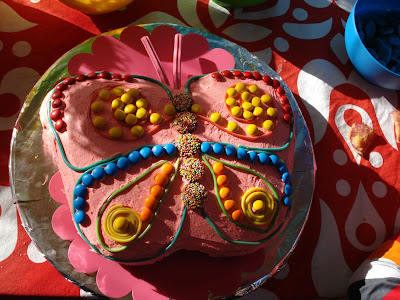 I will admit there was a bit of a shamozzle with the cake.. After all but a few of the kids had left somebody said "what about the cake?" and I said "oh shit the cake" and then a small child said "uhoh Mummy you said shit!".. so yes.. I forgot the cake.  It's just we were having so much fun.. and.. yeah, I forgot... oops.

But it was okay because we sang happy birthday with the kids who were left and we all had a giant slice.

At least I remembered to give everyone their lolly bags before they left!