So, I needed a quick gift for a 4 year old boy, and after a bit of googling, I ended up making him a bean bag toss game.

I thought about making counting bean bags like these ones , but realised that I was almost out of fusible webbing, so I decided to just make ones like these instead.

So here they all are.  I cut my fabric to 5" and filled them with rice because that's what I had in the cupboard.  Man were they a pain to sew around.  My machine did NOT like going over the rice so I had to try to keep it away from the presser foot. 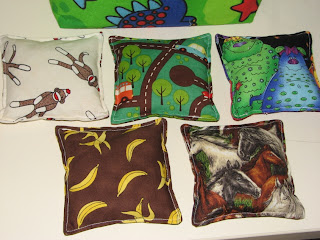 Then I made a fabric basket for them, but in my awesome late at night sewing haze, calculated it all wrong, so ended up with a huge basket for the 5 beanbags I'd made. 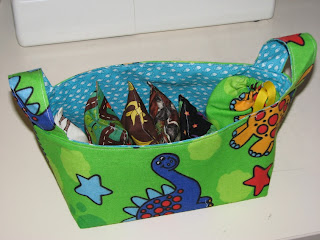 So then I made a little drawstring bag for some marbles, just to fill the hole. 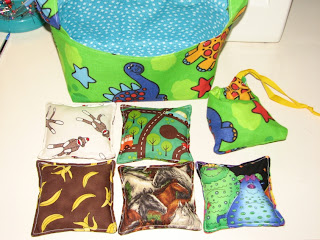 Geni wanted to keep it, will have to make one for her too.
Posted by Melli at 10:20 am

I must be thankful for sharing your ideas.Thank you for the good writeup.its a brelient job.please visit here for more detail:
Packers and Movers Ahmedabad