A Gift for my Mum

This was an idea I had seen on a few blogs, and filed away in my mind. 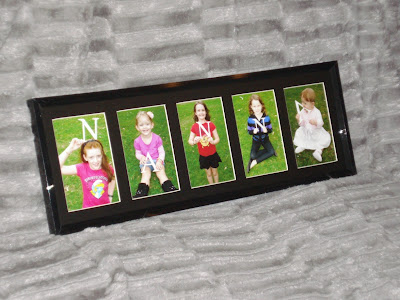 Just before Mothers Day this year I realised that my Mum now had the same number of grand kids as there are letters in the word Nanna.  Unfortunately it was about 2 days before Mothers Day, so we decided to do it for her birthday a few weeks later instead!

I went and bought an N and an A, painted them white, and we met up with my brother and his brood down at the park to take some photos.

The day we chose was pretty crappy, very overcast, we had a sleepy baby and it was occasionally sprinkling, plus our decent camera decided to kick the bucket so we had to use our little point and shoot Sony instead, but we did our best.

I took as many photos of each kid as I could so make sure we got at least one decent one of each of them, the middle child ruined almost all of hers because you could see her underpants when she was sitting on the ground (which I didn't realise at the time).  Luckily I took a couple of her standing up as well.


I spent ages making collages in picassa trying to get just the right group of shots together.. we ended up with a few different variations..

This was the only photo of the bubby looking, but we decided that the A didn't stand out enough against her dress.

I liked this one but my niece really wanted me to use the photo of her sitting down, rather than standing up..

So this was the final group..

I think it turned out pretty well!
Posted by Melli at 4:05 pm

Email ThisBlogThis!Share to TwitterShare to FacebookShare to Pinterest
Labels: Framed